The program entitled “Price Fixed” explored the link between aesthetics and market forces. Art is a nebulous domain, a domain where logos disappear and imagery takes over. What may be vague or felt ideas, feelings that are difficult to describe and put into words, are taken by the artist and visual images are created. The disruptions and discontent brewing beneath the social fabric are captured and conveyed visually in a form that is hard to miss or ignore.

‘Fixed Price’ the first exhibition curated by Abid Aziz Merchant, co-founder of Sanat Initiative, featured the work of Adeeluz Zafar, Meher Afroze, Muhammad Zeeshan, RM Naeem and Scherezade Junejo, and reflected on the past eight years of operating a commercial gallery in Pakistan, with all the varying and uncertain market forces, while building a wide and diverse network of relationships with artists and collectors. The exhibition explores the impact and implications of what it may mean to maintain this important node as a constant and important supporting infrastructure in the art world.

Adeeluz Zafar’s work on display featured his stuffed animals in bandages. Finely chiseled black and white engraving on photographic paper. It’s a motif he’s been exploring for some time. Two pieces were printed, one unmistakably Mickey Mouse and the other Bugs Bunny, both driven by humour, although wrapped in bandages, one could not miss Bugs B’s provocative stance and tilt of the head and hand gestures of affable mouse. It is fascinating that these figures seem ageless and what one saw in childhood is so deeply etched that one can recognize it even when the whole form is covered. An eternally optimistic form or characters, even in the face of defeat, they recover, tireless and in search. At 93, Mickey Mouse is a character that spans generations and is a global icon. Rendered in Adeel’s dark monochrome with gaping areas of darkness where the bandage sags, the image instead invites to evoke a deeper response. Behind Mickey’s smile and Bugs’ arrogance seems to lie the capitalist narrative, the promise of hard work and reward, but a deeply hierarchical system characterized by intense competition, a narrative presented to children at the preverbal stage who learn the inherent violence of division instead of nurturing it and nurturing the bonds of inclusiveness and unity. And there, in the soft warmth of children’s stuffed animals, hides another story, less sweet or nourishing.

Mehr Afroze’s work is informed by her cultural background rooted in Lucknow, although Karachi was her home. It is in this division of roots located in a different cultural context and a house located in a commercial center of the country that his exploration and his work reside. An in-depth exploration of retrieving a lost past aptly titled “Azmaaish”. Sensitive, delicate and rhythmic, his imagery conveyed a nuanced harmony that drew the viewer into the work, landscapes of earth tones and blues, a repeated pattern over which the eye brushed and there, embedded in a small square of each work, there was a word. ‘Ehed’ in one and ‘eeman’ in the other. The meaning of “ehed” is a promise, an allegiance and its reverse is responsibility. Whether a promise is kept or not, it is embodied in responsibility. The act of a promise is an act of responsibility, but the Urdu word ‘ehed’ embodies both the words of promise and responsibility, the connotation of responsibility bolder than the promise because the ‘ehed’ is given in a self-respecting culture synonymous with fulfilling an ‘ehed’. And the inability to perform an “ehed” signified the loss of self-respect, a reference to a lost past where one’s honor was one’s word. A past where such values ​​were defended. It is in this single word that the values ​​that were part of an Orient from which Mehr Afroze originated were embodied. It refers to a lost past, a heritage that a nascent country, a detached part of the whole could not and could not maintain. Struggling with economic and political instability, she has not been able to wield the soft power, the ability to keep her legacy. Yet it is not a country that has an “ehed”, it is each individual. In its blues landscape, embedded in a small square is the word “eman”. In an indigo blues landscape devoid of any other visual reference, held in place by fine rhythmic geometric patterns, the word ’eman’ – faith – appears to be self-referencing, rather than a faith referenced by format or religious belief. . Which implies a faith that one has in oneself, a faith in a superior power of creation, which allows the courage and the capacity to create and to deliver from oneself, from one’s promise. And perhaps in a nascent country in difficulty, stability will come from this “eman” and “ehed” of each individual. It may be an ‘Azmaaish’ but perhaps with deliverance.

Muhammad Zeeshan’s work is inspired by his initial training as a commercial painter at the age of fourteen for cinema signs. A graduate of the prestigious National College of Arts, his imagery evolved into dark, beautiful, self-reflecting women. Women have spanned a century, from the early 1900s through the mid-century to the present day. Done on sandpaper with a flat background of color, highlighting the calmness of the women as they gaze at mid-distance. Nangeli with her arm raised, chest uncovered and partially covered with a sari was referring to the tax women of a certain caste in Kerala had to pay more than three hundred years ago if they wanted to cover their chests. It was said that Nangeli, a young Ezhava woman from Cherthala, frustrated by this indignity, cut off both her breasts instead of handing over the tax to the tax collector. She did not survive, but her act of defiance has now become a symbol of resistance to the practice.

Muhammad Zeeshan recalls his youth when he had to paint black cross-hatch on exposed flesh or a woman’s cleavage on billboards as part of state censorship compliance. His series of calm, sensitive nudes spanning more than a century had one thing in common: the lack of bodily autonomy, from the brutal brute force inflicted on Nangeli and his caste women, to the censorship of the State and social norms. The concern for women in her work seemed to encapsulate the experience of empowerment or lack of empowerment that women have faced. 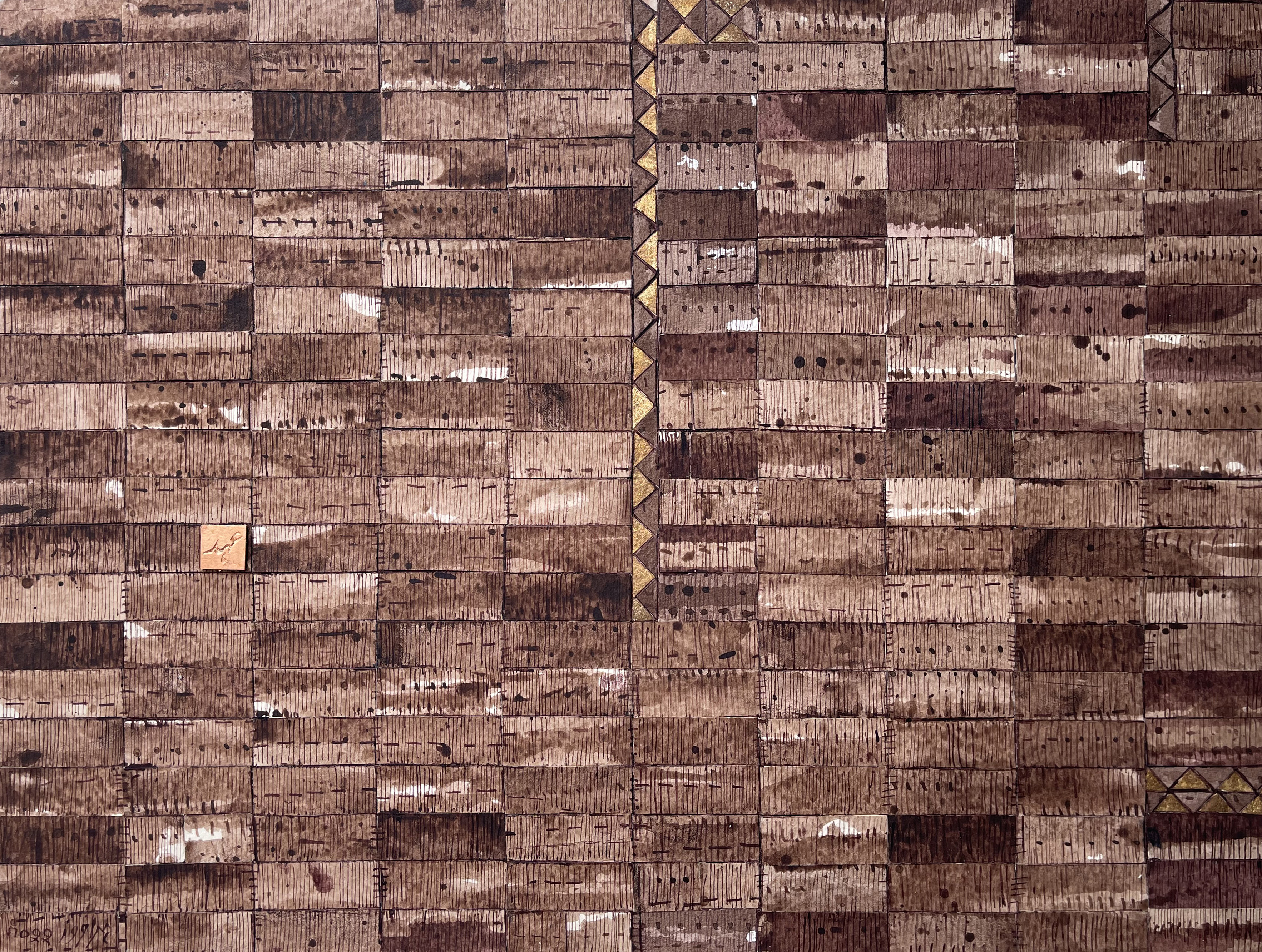 RM Naeem’s sensitive figurative works seem to have honed one thing: feelings of inwardness within a fully embodied human form. His large black and white landscapes were explorations. Against a layered background of porous rectangular landscapes was a steady atmospheric quality of rain, a downpour connecting heaven to earth. In the foreground, a woman, solid but soft, in her reality, like a slightly chubby woman seeming to hang the laundry with a child, or a childish doll filled with baby folds. In another, a younger woman, in tights, camisole, and hasty sweater, kneels in what appears to be prayer above a lit area of ​​organic, scattered, and suggestive growth. She held an offering of a few stalks, head bowed. In another, a young woman, with more common sense, appeared to be standing in a room in profile, her arm raised, her hand in pistol mode and hovering above, almost in flight, the cherub doll. These diverse women of different socio-economic status display the same sense of interiority, the same space for self-reflection, the same quality in the face of an obstacle. These women in RM Naeem’s almost surreal settings seemed to be brooding over a future, or a present or lack thereof. With a society rigged by its social, cultural and religious norms, what choices do women face, or is the word “choice” too generous for use by women in this social configuration. 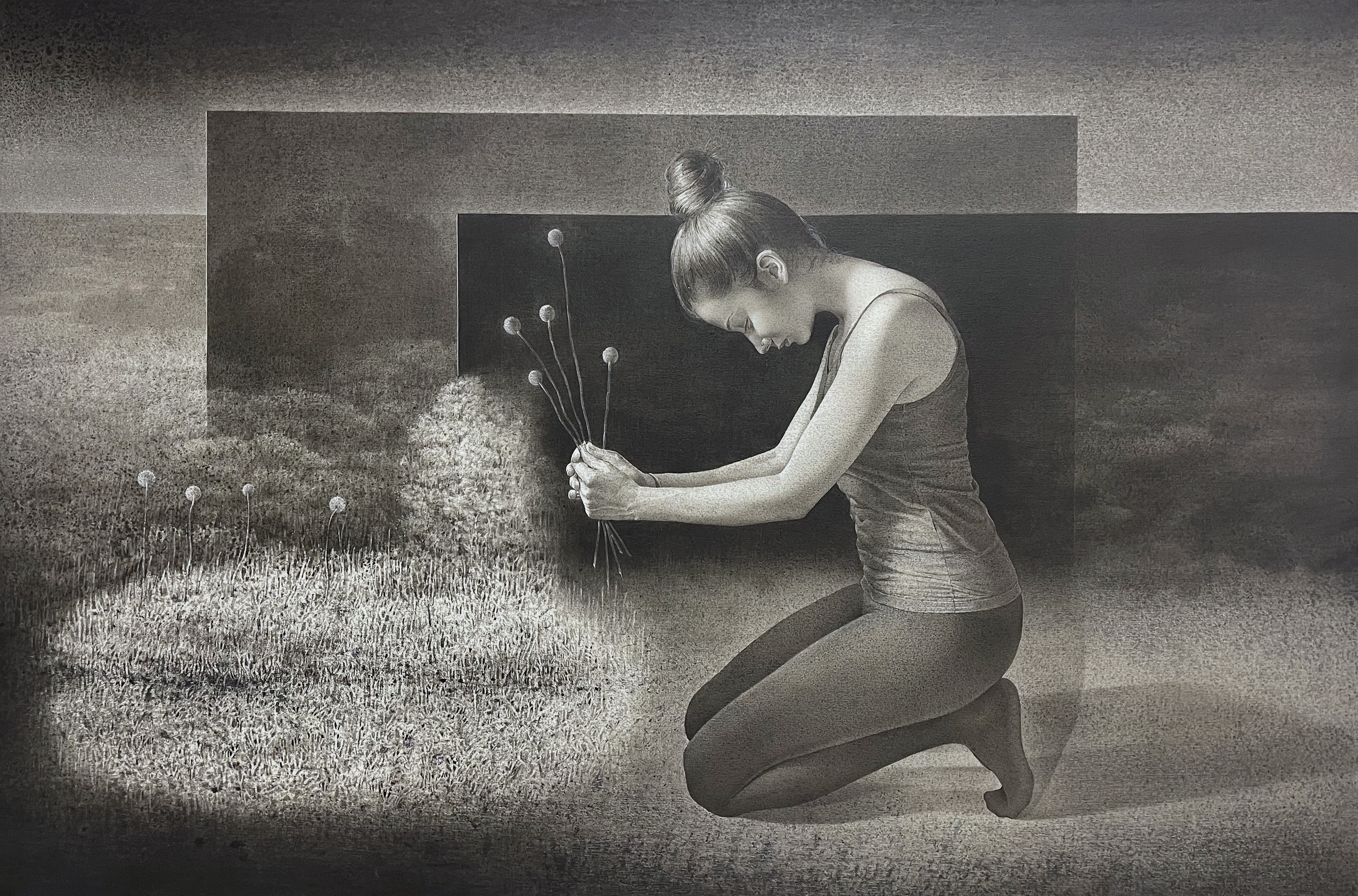 Polished and visceral, Scherezade Junejo explored a recurring theme, women. Beautifully crafted, imagery meant to provoke. Deeply crumpled red sheets torn in the middle of the canvas like paper and between the two a peeping organic form, pointed limbs, just the tip of the toes gently curling into the sole of the foot, as in relaxation and surrender sleep or pleasure. Although the form used by her is female, she is in the form of statues from classical antiquity, without a head, arms and legs, and apparently only the torso is visible. Of course, it’s hard to miss a nude from the front, but even from the back, it’s undeniably a woman. Pink with shiny gray balloons in the shape of a heart, with a perky graphic illustrative quality, the arch of the foot sore, withdrawn, confused, ashamed and the emaciated ribcage. The objectification sold to us and the embodied pain of women used to commercialize the capitalist goods of the West, for consumption, to the detriment of humanity. Perhaps the most violent illustration of this objectification is found in Scherezade’s last canvas, a bold layout of three nudes, shoulders thrown back, hips bowed, back arched, legs provocatively akimbo . Perhaps only a woman can paint something so inherently violent, women defined by the male gaze, objectified by commodities, glamorized on side streets, by fashion houses, by sparkles, their humanity lost, a simple sham of flesh for the products, to maintain an artificial demand, to maintain the hierarchy. The smooth, polished style of these nudes, embellished in every way, was too close to home, a ubiquitous image and aesthetic across all social media platforms, every mother’s exonerating ‘smile’, misogyny sold commercially and culturally, the violence that women are supposed to be meant to internalize. The plastic culture that commodifies a woman’s humanity, for purposes other than serving her, is explored and portrayed in unforgivable ways by Scherezade.

The exhibition was sensitive, bold and nuanced. The market can set a price, but the valuation of art that offers a mirror to society, how do you value that.

Asma Ahmad is a freelance writer. All information and facts provided are the sole responsibility of the author. The ‘Fixed Price’ exhibition organized by Sanat Initiative was held from August 2 to 11, 2022

Since November 2021, Frédéric de Goldschmidt has brought hundreds of people to his kitchen in Brussels, and even more to his living room – a superb double-height space, complete with a mezzanine. His bedroom has been taken over by a series of works dealing with place and memory, by artists such as Neïl Beloufa and […]

Northwest Coast artist Luke Parnell views his creative process as a form of storytelling. While studying sculpture in his youth, Parnell, born in Prince Rupert, British Columbia in 1971, says his only references to artists working in the Northwest Coast style were the famous production of artists Robert Davidson. and Bill Reid. In his youth, […]

“I say I’m kind of an urban archaeologist because I basically carve on city walls.” Alexandre Farto, alias Vhils, is considered one of the best urban artists in the world. Like many street artists, he started painting illegal graffiti when he was 13 years old. But at the age of 16, the Portuguese artist was […]