The most expensive lure in the sale, selling for $252,000, was this brant made by Nathan Cobb Jr. It is shown in a swimming pose and has an entry neck and split tail.

ST MICHAELS, MD. – The Guyette & Deeter sale on July 29-30 at the Chesapeake Bay Maritime Museum, as you might expect, included decoys – fish and poultry – miniatures and decorative carvings, sport paintings and duck calls, but you might not expect to see the folk art offerings or the Nantucket baskets. Over 70 lots sold for over $10,000 each. Some of the highlights of the lure selection were Virginia lures, including a swimming brant from Nathan Cobb Jr, which was the star of the sale and the highest price for a lure reached this year, making $252,000 .

A commercial figure from the Thomas Brooks cigar store topped the folk art selection, finishing at $84,000. Many of the decoys from the sale could have been incorporated into folk art collections. Contemporary sculptures included works by Frank Finney, William Gibian, Mark McNair and others. Sports art included works by Edmund Henry Osthaus, with his oil painting of three passers topping the $69,000 category. There were works by Aiden Lasselle Ripley and others, while the many fish lures included examples by Oscar Peterson and his contemporaries. Collectors were spoiled for choice: more than 35 Crowell sculptures, more than 60 fish lures, more than 90 sculptures by Virginia carvers – vintage and contemporary – nearly 25 plovers, 25 Ward Brothers sculptures, 17 Mason lures, five swans, 30 paintings, three cigar shop trade figures; The list could go on even longer.

The live sale took place at the Maritime Museum of the Chesapeake Bay, with previews at the nearby office of Guyette and Deeter. Internet auctions were available on four platforms, and mail-order and telephone auctions were handled. The 350-page indexed catalog is a reference work worth having. It contains numerous carver biographies, commentary on regional decoys, and several period photos of carvers, market gunners, and sportsmen. Before starting the second day of the sale, Jon Deeter commented on the catalogue: “We strongly believe in the importance of the catalogue. An educated lure collector is more likely to stay engaged longer. In addition, catalog descriptions are fully guaranteed. Less than a dozen lots out of nearly 600 for sale were sold. 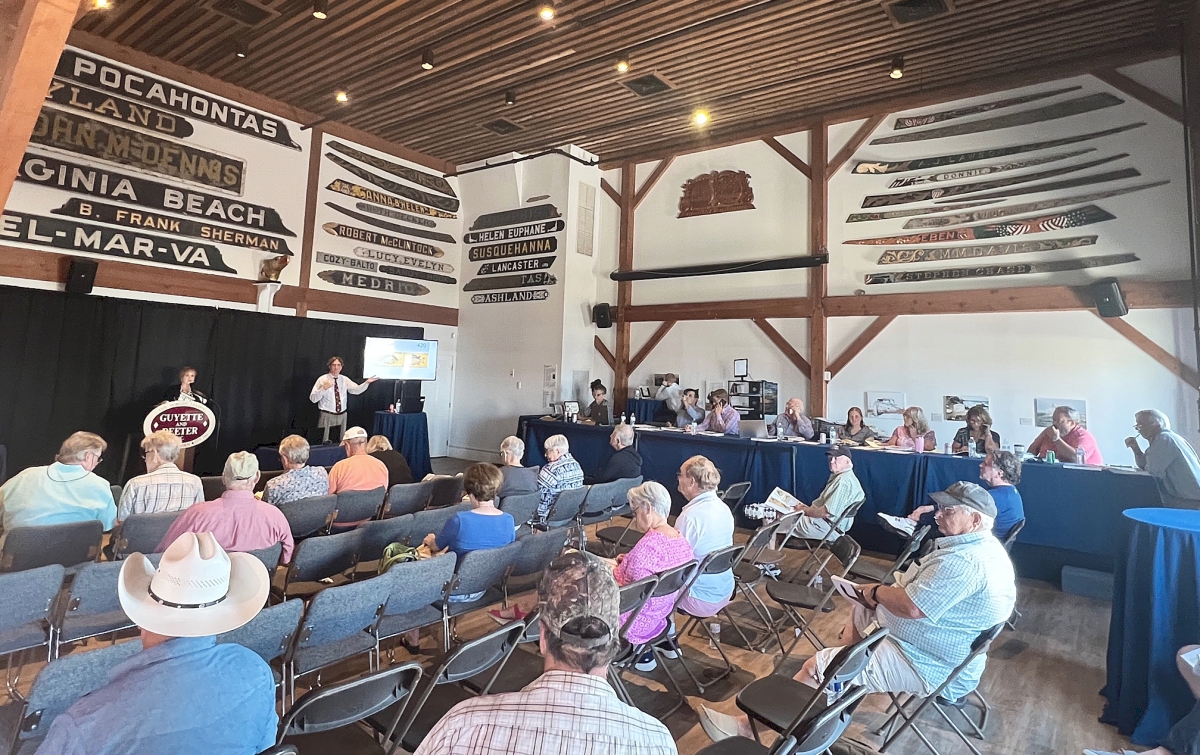 The crowd in the auction room were actively bidding, and behind them staff members were dealing with the phone and internet bidders.

Most of the large selection of carvings from the Virginia makers sold out on day one and did well, including the most expensive lure in the sale. Nathan Cobb Jr, who died in 1905, was a third-generation carver who lived on Cobb Island off the coast of Virginia, where his family also operated a hotel. Appreciation for the quality and collectability of his work began with the publication of the first book on decoy collecting, Joel Barber’s 1934 Wild fowl decoys, and respect for his work remains high today. He worked with “found” materials, wood washed up on the island, and he used natural roots and branches for the heads and necks. Crants were a sought-after species, both for sport and for the table. Its hollow fin, dating from the last quarter of the 19th century, sold for $252,000. It had an E carved into the base, indicating that it was from the rig of Elkanah Cobb, Nathan’s son. The decoy remained in the Cobb family until Guyette and Schmidt sold it in 2004. A carved hollow black duck by the same maker fetched $15,600. It had cost a previous owner $1,000 in 1976.

Other Virginia decoys included a rare pintail with raised wingtip carving by Dave “Umbrella” Watson, which sold for $70,800, one of the highest prices at the sale. The nickname comes from the fact that Watson always carried an umbrella. There were also distinctive Virginia shorebird decoys. The most sought after was a folksy, tall, plump curlew made by Eli Doughty, Hog Island, Virginia, which fetched $56,400. Another Virginia shorebird, a late 19th-century running plover from Robert Andrews, Smith Island, Virginia, fetched $22,800.

Shorebirds, in general, brought high prices. In addition to those mentioned above, an exceptional third-quarter 19th-century Golden Plover by an unknown Nantucket sculptor fetched one of the highest prices at the sale, $75,000. It was hollow carved and displayed a split tail sculpture and glass eyes. A circa 1900 black-bellied plover in emergent plumage by John Dilley, Quogue, Long Island, NY, fetched $36,000. Another outstanding and eye-catching Long Island lure by Captain Al Ketchem, perhaps not quite a shorebird, was a 19th-century Great Blue Heron, which fetched $37,200. It had a three-part body, a long neck, and glass eyes. 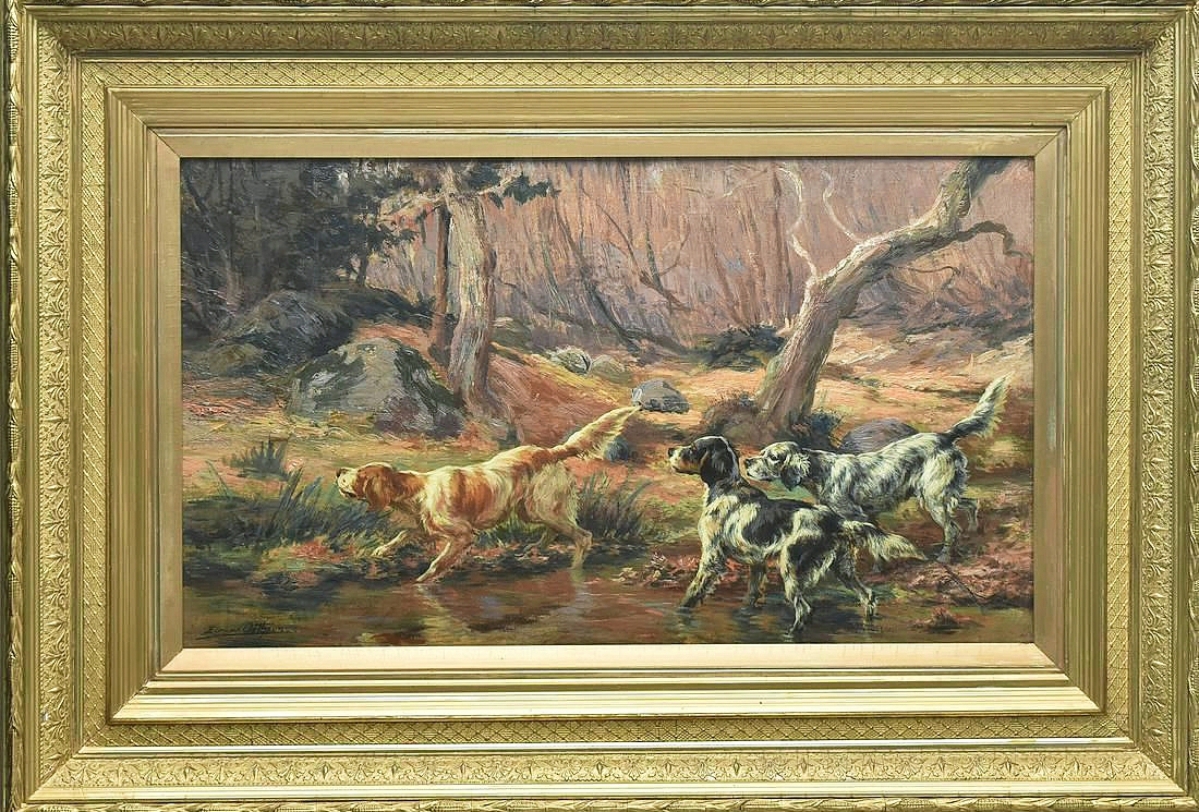 Selling for $69,600 was a painting of three ferrymen in a wooded landscape by Edmund Henry Osthaus. It was the top seller of sports art offerings.

The sale began with a selection of 20th century decorative sculptures, including a ruffed grouse by the Ward Brothers of Crisfield, Md. With raised, fanned wings, it was signed and dated 1969. Only five are believed to have been made, and this one sold for $22,800. Other decorative examples from Ward Brothers include a preening pintail with raised wings and a folded head, which fetched $8,400. A hollow-carved Fulvous tree duck by the same maker sold for $6,000. There were several outstanding sculptures by William Gibian, a Virginia sculptor born in 1946. A pair of hollow-carved pintail ducks with raised wings fetched $6,000, and a wing-preening lapwing, with encrusted metal feathers, brought in $4,500. His homing pigeon with raised wingtips and raised feather carving sold for $1,560. 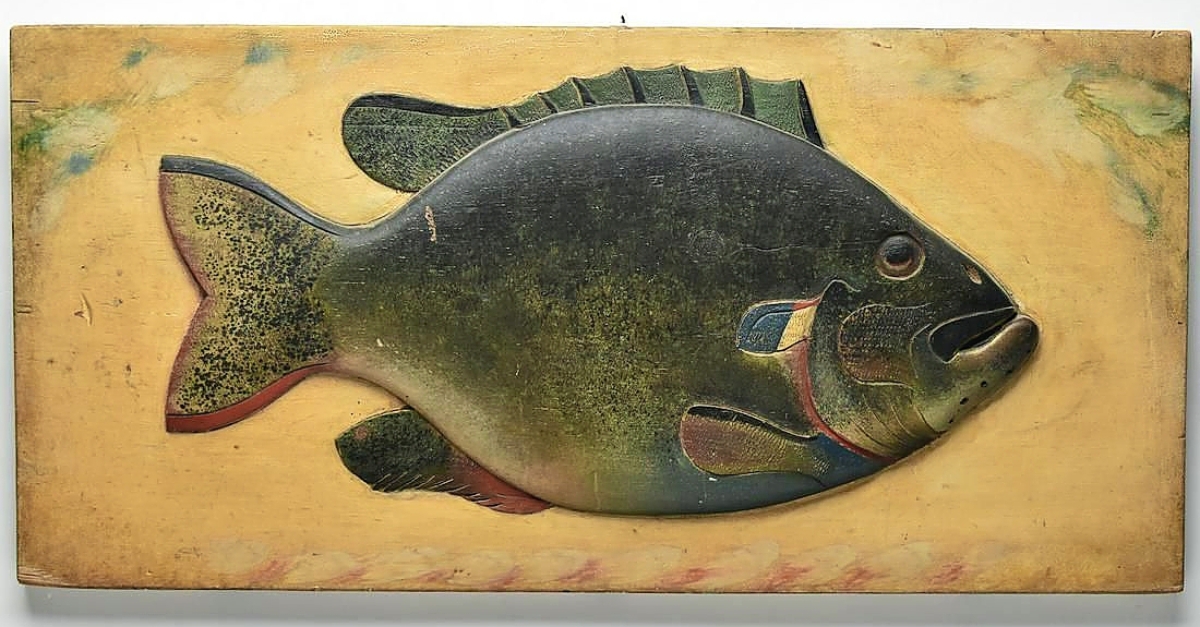 The most expensive of Oscar Peterson’s sculptures was this 32 inch long bluegill plaque. It was sculpted with detailed gills and fins and fetched $51,000.

Day two featured 30 sculptures and paintings by Frank Finney, Cape Charles, Va., born 1947. A life-size owl, 24 inches tall, with a field mouse gripped in its talons, sold for $16,800. A large oil painting by Finney, one of three in the sale, depicting a hunting scene with a sink and a variety of wild birds fetched $20,400, more than triple the estimate.

The other sports art was topped with an oil on canvas by Edmund Henry Osthaus (1858-1928). It was the subject of a long bidding competition between two bidders determined by telephone. Osthaus was one of the top dog painters in the United States, with works in several museums. The $69,600 sale was his painting of three smugglers in a wooded landscape. His watercolor of a smuggler named “Jeff” fetched $15,600. A watercolor by another popular sports artist, Aiden Lassell Ripley (1896-1969), “Geese at Currituck” depicting goose hunting in Currituck, NC, fetched $45,000.

Guyette & Deeter’s recent sales have included plenty of fish lure deals and this sale has done the same. Oscar Peterson of Cadillac, Michigan, working in the second quarter of the 20th century, is the acknowledged master of fish carvings. In addition to lures, he also produced decorative plaques, and one of them, featuring a bluegill over 24 inches long on a 32-inch bottom, fetched $51,000. From time to time he also carved other animals, and an unusual polliwog, one of four he is known to have made, won $28,800. As Peterson’s story is told, he often traded his carvings for whiskey at a bar in his hometown. 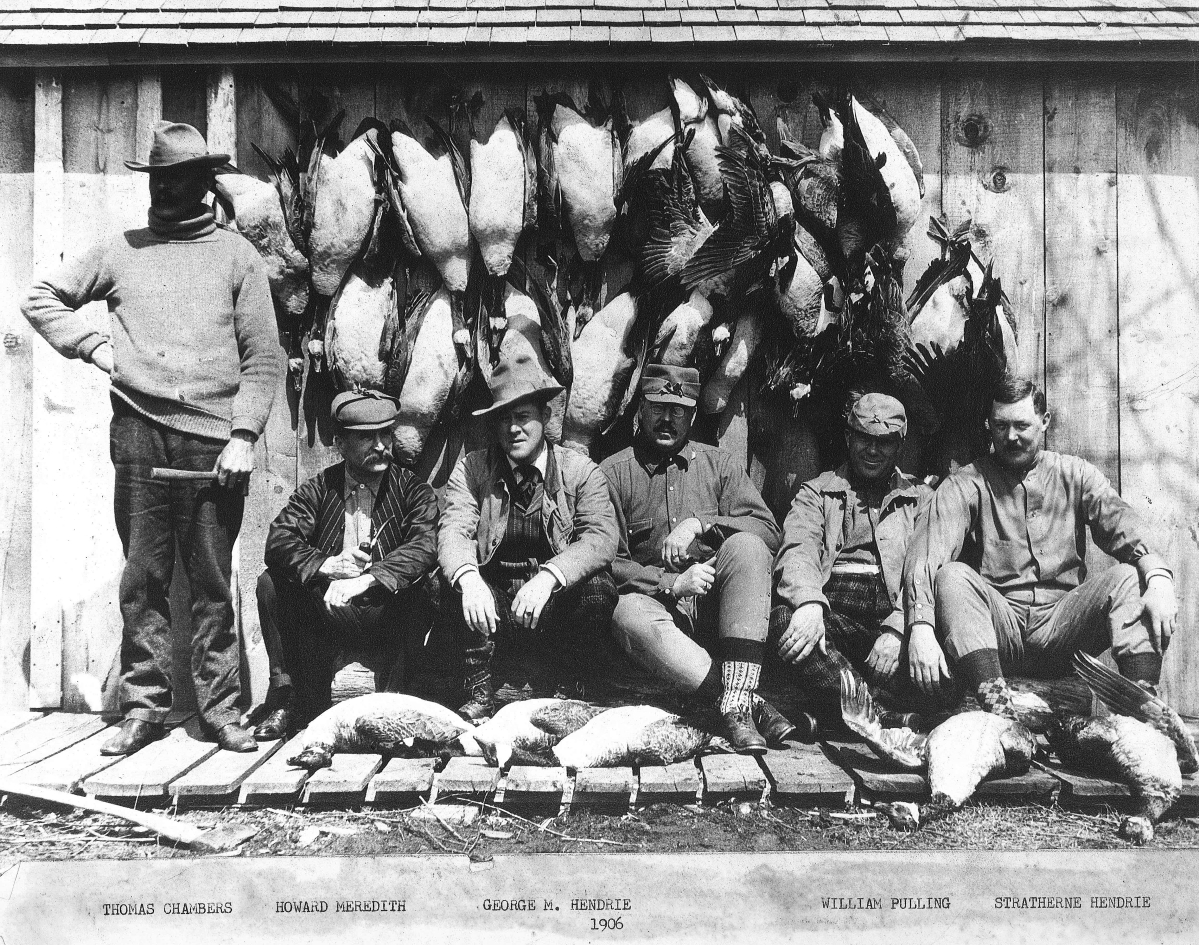 Tom Chambers was a carver and lure hunter from Toronto, Canada. He is on the far left in this photo, which shows some of the birds captured during a day of hunting with friends identified at the bottom of the photo.

A recent Guyette & Deeter sale included a cigar store turnover and it worked out well. This sale included three from the collection of Mark Goldman, who began collecting in 1967 and has more than 100 tobacco trade figures. Additional sculptures from his collection will be sold in future sales. A figure of a Native American chief attributed to Thomas Brooks, New York, made in the third quarter of the 19th century, fetched $84,000. One hand, holding seven cigars, was extended from the body and the other hand held a percussion rifle. The chief wore a large feather headdress. The surface was restored and there were minor condition issues. A 49-inch Native American girl from the same collection, this one attributed to Samuel Robb, fetched $39,000. She wore a headdress and held a sheaf of tobacco leaves.

The day after the sale, Jon Deeter said: “It worked really well. The Chesapeake Bay Maritime Museum is right on the water, so people attending the auction could take advantage of our free lunch on the dock and they could take a break from the auction, enjoy the museum, enjoy the surroundings and chat with old and new friends. The sale brought in over $3.3 million, just slightly below our high estimate, including the highest price for decoys sold so far this year and we had a great turnout. It turns out to be a good year for us. So far, our catalog sales have brought in over $6.75 million and our weekly online lure sales are on track to bring in around $2 million for the year. We look forward to the first sale in February of our new firearms division. We will specialize in sporting weapons, primarily double barrel and over-and-under shotguns. There will be no military type weapons. Josh Lowenstein will lead this division. He’s well known in the business, and we’re expecting the February sale to have some great stuff. I’m really happy with how things are going this year and I’m looking forward to next year.

The prices shown include the buyer’s commission as quoted by the auction house. For information, www.guyetteanddeeter.com or 410-745-0485.

Artist John Sauve stands in front of his sculpture, Selbsterkenntnis, in downtown Mount Clemens on August 28. Photo by Deb Jacques Visitors to the digital map can also submit artwork on display in the county. Photo by Deb Jacques MACOMB COUNTY – Want to find out where all the local art can be found? Macomb […]

Despite cooler days and slightly cooler nights as students return to school, plus a few changing leaves here and there, fall technically begins on September 22. The fall exhibition season is about the same. Fortunately, a number of city institutions are putting on some of their best summer shows through October, including ‘All That Glows […]

Gallery of band members looking in the Stringer Gallery at Nambucca Heads as part of a class called Treasures of Australian Art. HAVE you ever seen a painting in an art gallery and thought “I wonder what this is about?” If so, here is the opportunity to discover “the art”. The Nambucca Valley Art Appreciation […]