‘THE GROVE’ BY DEVAN SHIMOYAMA AT THE ‘FUTURES’ EXHIBITION AT THE SMITHSONIAN’S ARTS + INDUSTRIES BUILDING. COURTESY OF ALBERT TING.

JSunlight pours in from the large studio windows on the second floor of the Brew House artists’ lofts. It gives a shine to artist Devan Shimoyama’s tools of the trade. On a shelf, a rainbow of sequins in sapphire, lime, yellow. On another shelf, baubles and fake jewelry shine like precious metals. Bright sequins and artificial flowers are all around.

On the walls, larger-than-life paintings – each containing elements of self-portraiture – reflect his view of homosexuality, beauty and humanity.

“Sedusa” is an intense figure in red, a painting that adds African elements to the mythological medusa, while referencing Shimoyama’s migraines and his love of cartoons. Another painting is an admiration of Shimoyama with his braided hair. As someone who typically wears their hair in an afro or a tight cut, he reflected, “I felt like a stranger to myself looking at me. And so, I used that moment to create the painting.

There is also the image of the figure of death from a tarot card; the skeleton is near a shimmering body of blue glitter water. Shimoyama, who has lived in Pittsburgh for eight years, winked that he could have considered parting ways with a longtime partner.

“When I paint,” Shimoyama says, “it can come from something deeply personal or something that begins to interest me.”

For example, Shimoyama grew up in a Baptist household with no tarot cards or other types of mysticism present. But when he began to explore alternative healing practices, it fueled an affinity for tarot.

Shimoyama’s work shines – literally and figuratively – when he applies what could be considered the playful, dazzling “feminine” accessories found in a dressmaker’s drawer, “things you might see more on a drag queen, or maybe a black lady in church,” he says.

But his work, he says, also evokes a connection to African-American culture, providing “a visual syntax” of faux luxury, glitz and glamor that concerns many black people. These are the clothes they wear to feel good about getting around in an oppressive society.

Although Shimoyama, 32, creates much of his work as “cathartic personal healing” to deal with the greater toxic pressures of being black and queer in America, he considers himself more of an artist than an activist. There is no doubt, however, that when elements of his own culture and identity – much like the ubiquitous glitter he uses – are sprinkled onto his designs, he activates dialogue across identity, race and gender. membership.

For his audience, this pomp is an attraction, bringing them closer to the work and helping them to engage and question homosexuality and masculinity without shame. In recent years, it has gained international recognition.

In November, he created “The Grove,” an art installation commissioned by the Smithsonian Museum to help reopen its Art & Industries building as part of the “FUTURES” exhibit. The exhibition is visible until July 6.

“FUTURES” curator Ashley Molese, impressed after seeing Shimoyama’s work in another gallery, thought her age and lived experience would provide a unique perspective on issues related to health, economics and life. social justice. He was asked to create a future memorial for the year 2020 that recognizes the collective trauma of the pandemic, political division and the persistence of racial violence.

Inspired by the impromptu urban memorials he’s seen in Philadelphia and Pittsburgh, Shimoyama transformed a typical dark altar into something bright and meditative, where twinkling power poles share the space with bejeweled sneakers hanging from power lines. Artificial flowers and butterflies, says Molese, invite visitors into a “welcoming and uplifting” place. 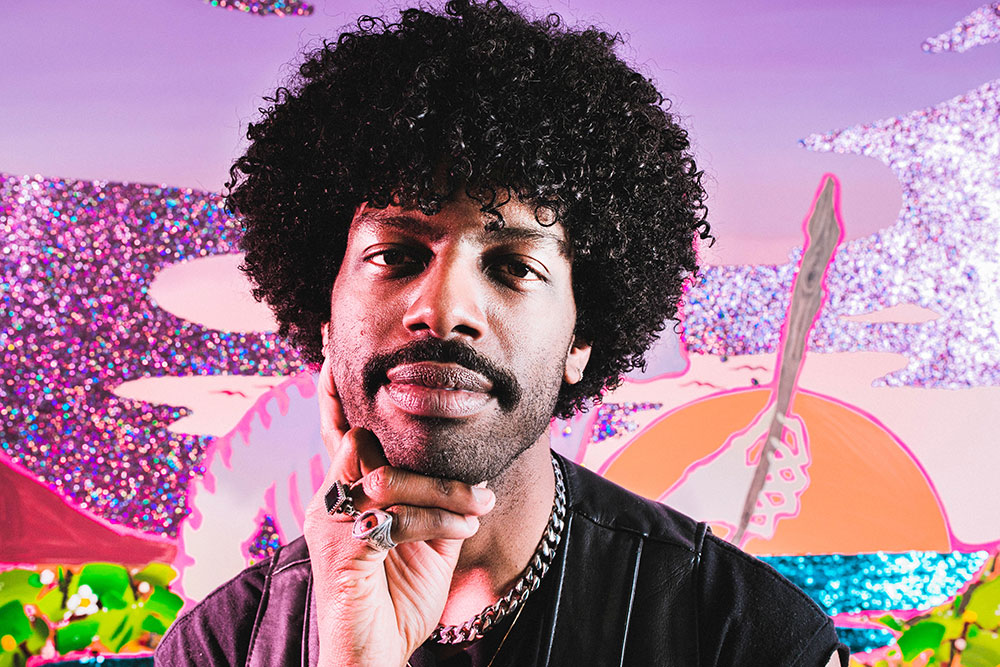 For Shimoyama, it’s an enchanted forest, where a space of pain can become a space of healing.

“To see so many black-identifying people die from police brutality or be raped in so many different ways or to see friends of mine who are trans regularly suffer so many horrible and horrific injustices,” Shimoyama says, “my work becomes a way for me to process this without depicting suffering black bodies.

The abundance of these types of images can make them look normal, he says. But, as a result, they only trigger more pain and harm.

In 2018, Shimoyama presented his first solo exhibition, “Cry, Baby”, at the Andy Warhol Museum. Largely through self-portraits, drawn from images of himself, his mother’s lips and his grandmother’s clothes, he explored the hyper-masculine frame of barbershops, homophobia and racial stigma.

Jessica Beck, who is Milton Fine’s art curator for Warhol, met Shimoyama about a year after the artist arrived in Pittsburgh, where he teaches painting at Carnegie Mellon University and encourages students to reflect on how to integrate materiality into their work. .

Beck says she liked Shimoyama’s sense of “making fantasy worlds” to comment on contemporary issues. He was also able to “reclaim” the hair salon as a space of warmth and not as a place of alienation, she adds. “Cry, Baby” featured a hoodie that referenced the killing of Trayvon Martin in a gated community in Florida, and a swing – a children’s toy – to reference the police killing of 12-year-old Tamir Rice in a playground in Cleveland. 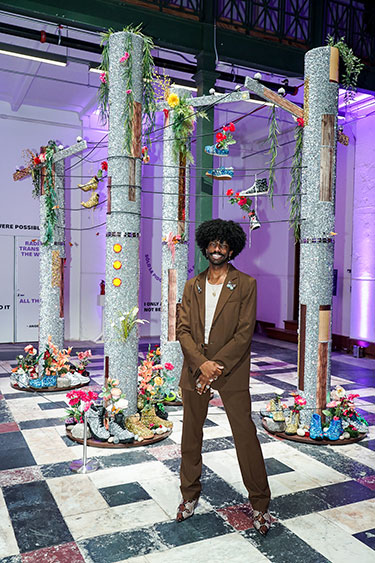 DEVAN SHIMOYAMA IN FRONT OF HIS WORK, “THE GROVE”, IN THE “FUTURES” EXHIBITION COURTESY OF FOTOBRICENO

The exposure also coincided with the fatal June 18, 2018 shooting by police in East Pittsburgh of Rankin’s 17-year-old African American Antwon Rose. The show was so timely and relevant, Beck says, “it resonated with audiences.”

Shimoyama grew up in Germantown and northeast Philadelphia in the 1990s, where her grandparents collected carvings and crafts during their travels in the Caribbean and beyond. R&B and Baptist church music filled the house. Shimoyama noticed the shiny clothes his grandmother wore for Sunday worship. For a time, her mother studied fashion design at university.

Of Japanese and Trinidadian descent, Shimoyama’s last name made him feel like an outsider in his youth. He finds refuge in the violin and spends much of his time watching cartoons and drawing. A friend of his mother’s gave Shimoyama his first art lessons, and he took weekend classes at local colleges. He still remembers hand-painting his family’s nativity figurines, giving the holy family brown faces.

Despite such exposure to art in his home, Shimoyama, like many young black people, believed that art was only “what you saw in museums by dead white artists or cultural remnants of ancient times” .

Because an aunt had gone to college to become a nurse, he too went down a science-related path. He enrolled at Pennsylvania State University to study biology, possibly hoping to become an anatomy illustrator.

During his sophomore year, he woke up one morning and thought, “I can’t do this anymore.”

He put together a portfolio and was accepted into the university’s School of Visual Arts, where he focused on drawing and painting. It was an act of faith. The new art student didn’t know how artists did what they did, but Shimoyama says he was determined to learn.

Very quickly, Shimoyama immersed himself in courses in oil painting, sculpture, ceramics, engraving and character drawing, which he loved. Many times he stayed in his studio until 2 a.m., experimenting with techniques and teaching himself.

Penn State teacher and visual artist Brian Alfred recognized Shimoyama’s dedication and encouraged his student. His Contemporary Artists course introduced Shimoyama to creators such as Basquiat, Mickalene Thomas, Howardena Pindell and others. Beyond technique, Shimoyama learned how artists integrate identity, passion, and perspective into their work.

Following their example, Shimoyama began to cultivate and explore the “visual language” – using luster and glitz – that would help him convey the ideas that mattered most to him.

As Shimoyama continued to discover his style, he arrived at Yale graduate school in 2012. There was a defining moment, just before his first portfolio review, which included a self-portrait of him hugging.

At the last minute, he decided to cover the whole background with silver glitter, which he had never done before. “Oh, my God, I just ruined this whole painting,” he thought.

When a dean’s review called this particular work one of the most exciting and intense pieces in the portfolio, it allowed Shimoyama to move on to the techniques that have become part of his signature.

“I learned in graduate school not to sit comfortable with what felt safe or familiar and to allow myself to take risks and that feedback was not something to have scared,” he said.

These risks have led to Shimoyama’s work being collected by celebrities such as musician Alicia Keys and her husband, producer Swizz Beatz.

Many of them are drawn to the hip-hop references that are embedded in his art. He used signifiers such as Timberland boots, pop singer Rihanna’s hand, lyrics from a Toni Braxton song. Some of his works are set to be part of an upcoming exhibit on hip-hop culture at the Baltimore Museum of Art.

But the hoodie, as evidenced by the Warhol exhibition, remains a strong element.

Shimoyama adorns his hoodies with sparkles and colorful flowers, asking viewers to reimagine their symbolism.

The hoodie “has become so iconic of black masculinity in so many dark and sad ways,” he says. When he encrusts clothes with brooches, rhinestones and roses, he says, “it’s a way for me to subvert that kind of thinking.”

Ervin Dyer is a writer, editor and sociologist. Her job is to tell stories about the people and culture that shape the African Diaspora.

From its jungles to its deserts: the newly crowned best female chef in the world, Leonor Espinosa, draws inspiration from Colombia’s vast biodiversity and painful history. “My cooking tastes of relegated cultures, of forgotten regions, it tastes of ancestral techniques, of smoke…of pain,” the 59-year-old said after being voted the world’s best female chef 2022. […]

The producers of Spider-Man: Across the Spider-Verse discuss the sequel’s stunning art styles, which will be different in each dimension of Spidey. Spider-Man: Through the Spider-Verse producers teased that fans should be ready for some “breathtaking” new art in the upcoming two-part sequel. Spider-Man’s final years in media were some of the character’s greatest to […]

Culture – 5 days ago Photo credit: Image courtesy of Arielle Lines Okayplayer spoke with Alim Smith about Afro-Surrealism, turning memes into art, his work for Atlanta, and more. In 2022, memes have become an important way to engage with others, sometimes appearing as a separate communication system in their own right. From interacting […]