Anastasia Samoylova has been a sensation on the international photography scene since leaving Peoria and moving to Miami Beach.

A book of his eerily serene but unsettling photographs titled FloodZone (Steidl, 2019) paints a beautiful but unsettling view of Miami’s superficial glitz amidst relentless sea level rise. A second book, titled Floridas, is slated for publication. in March 2022.

His photographs have been featured in solo and group exhibitions in Amsterdam, Berlin, Frankfurt, Madrid, Moscow, Vienna, New York and Miami and have received praise from top curators and critics. Sarah Rosen, of online publication Document Journal, writes: “Lush, beautiful and alluring, Samoylova’s photographs…are subversive images of paradise, bright and uncluttered, subtly revealing something hellish lurking just below the surface. .

Samoylova earned an MFA in architecture and environmental design in her hometown of Moscow and an MFA from Bradley University in 2011. She taught photography at Illinois Central College and Bard College before moving to Miami in 2016.

FloodZone features a carefully edited collection of 87 photographs taken in and around Miami, Florida, which Samoylova describes as “the epicenter of sea level rise.” Rather than presenting scenes of devastation, each image is precisely composed and hauntingly beautiful. Although water is a recurring theme throughout the book, these are not typical beach scenes. Water seeps in ominously, sometimes in places where water shouldn’t be. Through Samoylova’s lens, water becomes a thin shimmering surface on a fine mosaic floor or rippling reflections on otherwise solid walls. 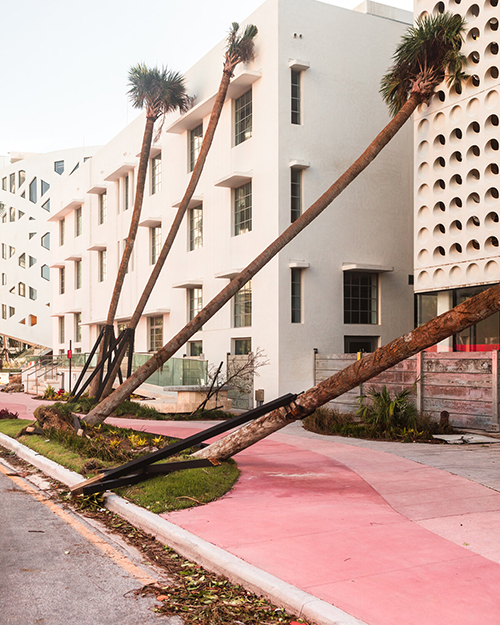 A distinctive color palette pervades the images in FloodZone. Pastel pinks and yellows signify tropical tourist paradise, while nature asserts itself in saturated greens and blues. The insistent cheerfulness of Miami Beach’s signature pink sidewalk contrasts with a neat row of storm-toppled palm trees. Reflections in shop windows or large commercial banners such as those obscuring ongoing construction sites create disconcerting spatial anomalies, contributing to the general feeling of dissociation and alluding to the anguish of living in a state of partial denial. Although these images are camera photographs, some of the recurring compositional devices, such as photographs within photographs, reference some of Samoylova’s earlier work that brilliantly used constructivist-inspired assemblage.

In her new book, Floridas, Samoylova presents a melancholic and insightful view of Florida’s less traveled regions, particularly the interior and the northwest coast. She revisits some of the locations photographed by one of her photographic heroes, Walker Evans, who is perhaps best known for his famous depression-era images of the rural south, widely photographed in Florida from the 1930s to the 1970s. The photographs of Samoylova and Evans are cleverly paired throughout the book, effectively opening up the fourth dimension – time.

Floridas overt environmental message is embedded in a sharper vision that reminds us of the disparity between vacation paradise and the realities like income inequality, waste and neglect that lurk beneath this supposed paradise. The book also contains a text by David Campany, curator, writer and general director of programs at the International Center of Photography, and a short fiction by novelist Lauren Groff.

Readers of this column might wonder what this has to do with “Inland Art”.

We who live in the Midwest are inextricably linked to Florida and the Gulf Coast. The river flowing through Peoria empties into the Gulf and washes the coasts of Florida and other Gulf States. Perhaps equally important, much of Florida’s material culture as we know it was created as an escape for people from the Midwest and Northeast. It was, however, built on top of a fragile and threatened ecosystem. In the dialectic between the plating of man-made structures and the unstoppable forces of nature that invade and erode them, Samoylova remains agnostic as to which side will prevail.

Current and past photographic projects of Anastasia Samoylova are available at www.anasamoylova.com. 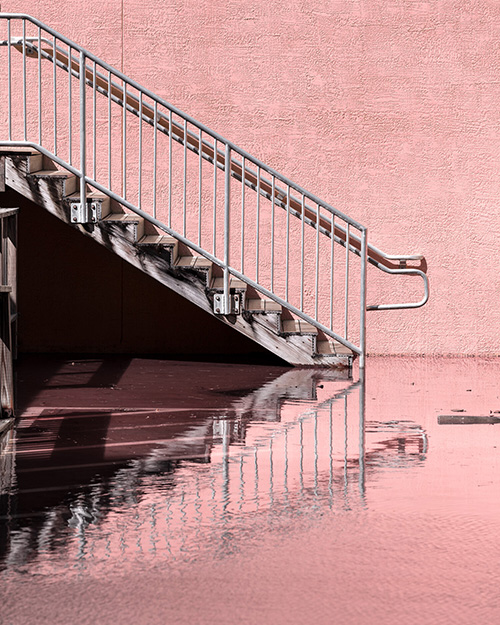 “Staircase at King Tide, Hollywood”, 2019 by Anastasia Samoylova. This photo and the adjacent “Fallen Trees on Collins Ave., Miami Beach Sidewalk after Hurricane Irma” can be found in the photo book titled Floodzone by Samoylova. (PHOTO SUBMITTED)

Inside the prestigious Pérez Art Museum Miami (PAMM), artist Marco Brambilla’s towering 8K audio-video collage “Heaven’s Gate” (2021) was installed this summer – a monument to the vertical worldbuilding style and whimsical of the filmmaker. In the work, Brambilla references some 800 films through components that have been rotoscoped from their source material and superimposed […]

Lou Hirshman does Albert C. Barnes. Lou Hirshman March 24, 2022, 12:00 p.m. 💌 Do you like Philly? Sign up for Billy Penn’s free newsletter to get everything you need to know about Philadelphia, every day. Artist Lou Hirshman, a Ukrainian native and Philadelphian who once headed the faculty at Fleisher Art Memorial, was known […]