The vaults above the flooded basements contain the largest public collection of works by Pablo Picasso in the region, as well as hundreds of millions of paintings and drawings by masters such as Joan Miro, Marc Chagall and Lucian Freud. 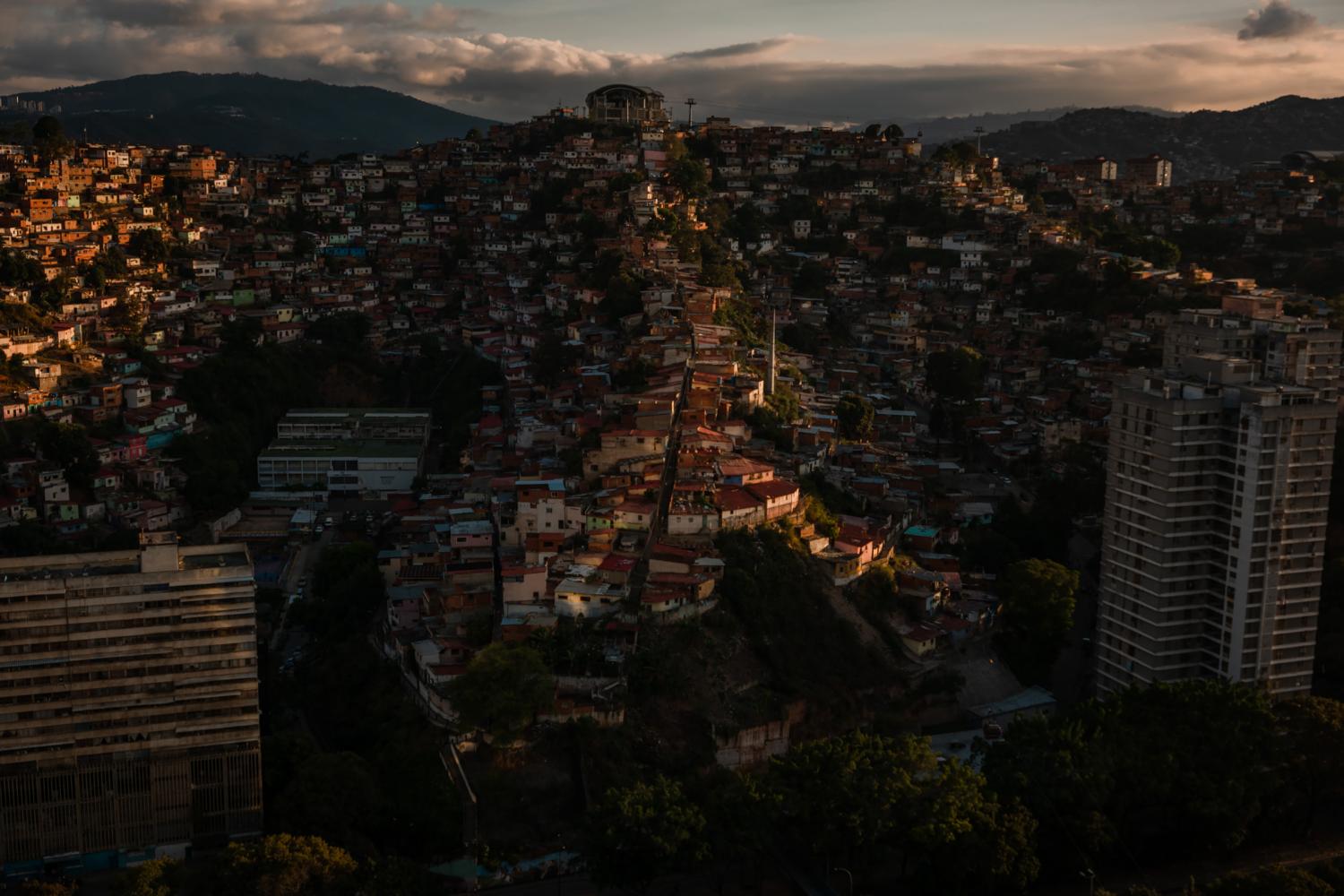 Nearby, 700 sculptures by iconic artists, including Salvador Dali and Fernando Botero, are crammed into a large hall to protect them from the encroaching humidity.

It is Venezuela’s Museum of Modern Art in Caracas, or MACC, once a regional benchmark for cultural education, that has fallen victim to economic collapse and authoritarianism.

Buoyed by Venezuela’s oil wealth, the museum has hosted exhibits by internationally renowned artists, purchased masterpieces and nurtured groundbreaking local artists, projecting the image of a confident nation moving towards modernity and prosperity.

Today, the museum’s underpaid workers and cultural managers struggle to preserve and display the collection after years of deterioration, technical closures and official indifference. 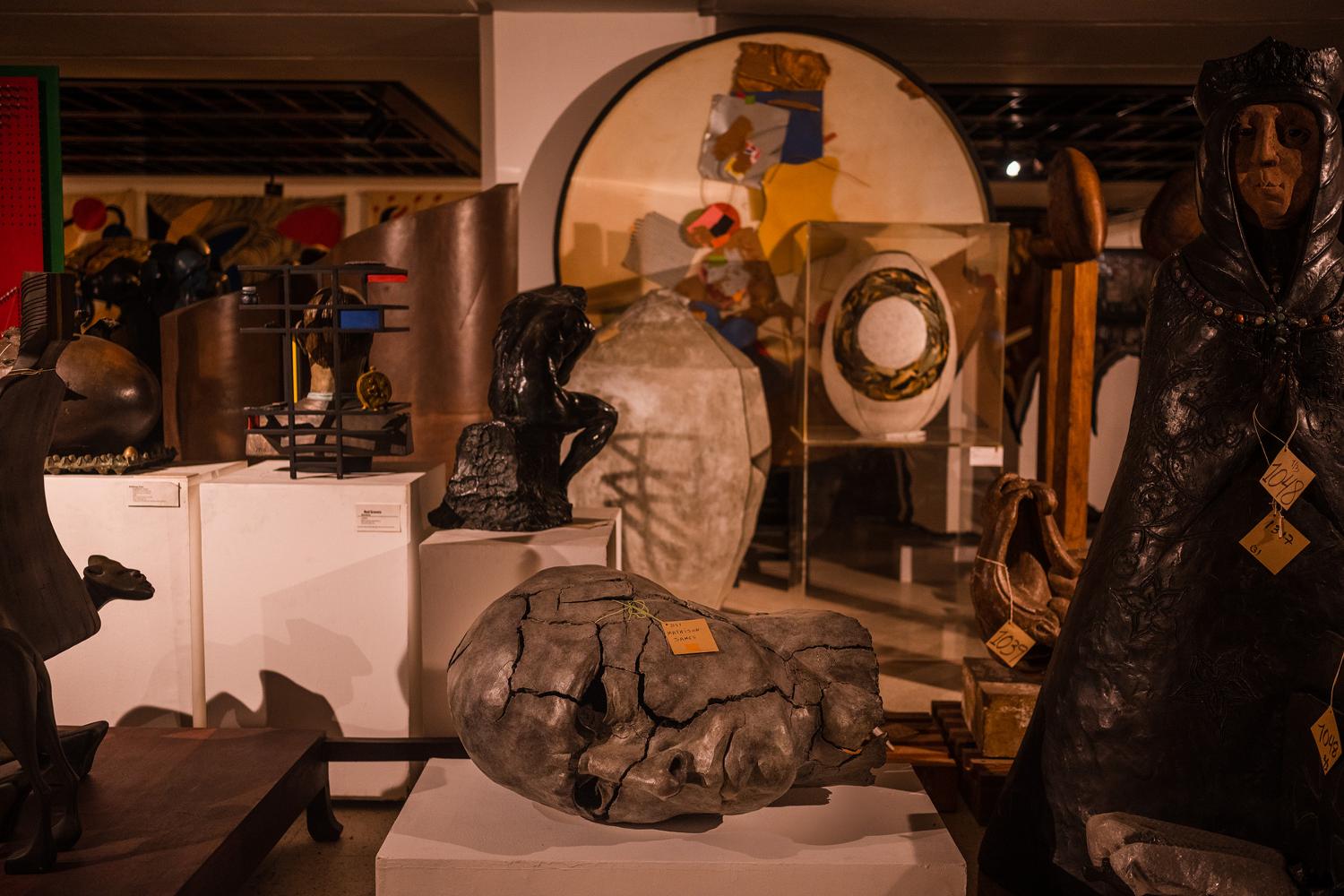 A sculpture by James Mathison in the vaults of the museum. ADRIANA LOUREIRO FERNANDEZ/nyt

The decline of the museum illustrates the lasting effect of political polarization on national culture. A “cultural revolution” launched by Venezuela’s socialist government in 2001 has turned every institution into a political battleground and divided citizens along ideological lines, tearing apart common cultural heritage over the past two decades.

“Culture, like everything else, has become divided,” said Alvaro Gonzalez, a Venezuelan art conservation expert working at the museum. “We have lost the moorings of who we are as a nation.”

Thanks to the work of Mr. Gonzalez’s team and the Ministry of Culture, as well as pressure from Venezuelan civil society and local media, the museum partially reopened to the public in February after a two-year closure, reflecting the country’s recent modest and uneven economic recovery. . 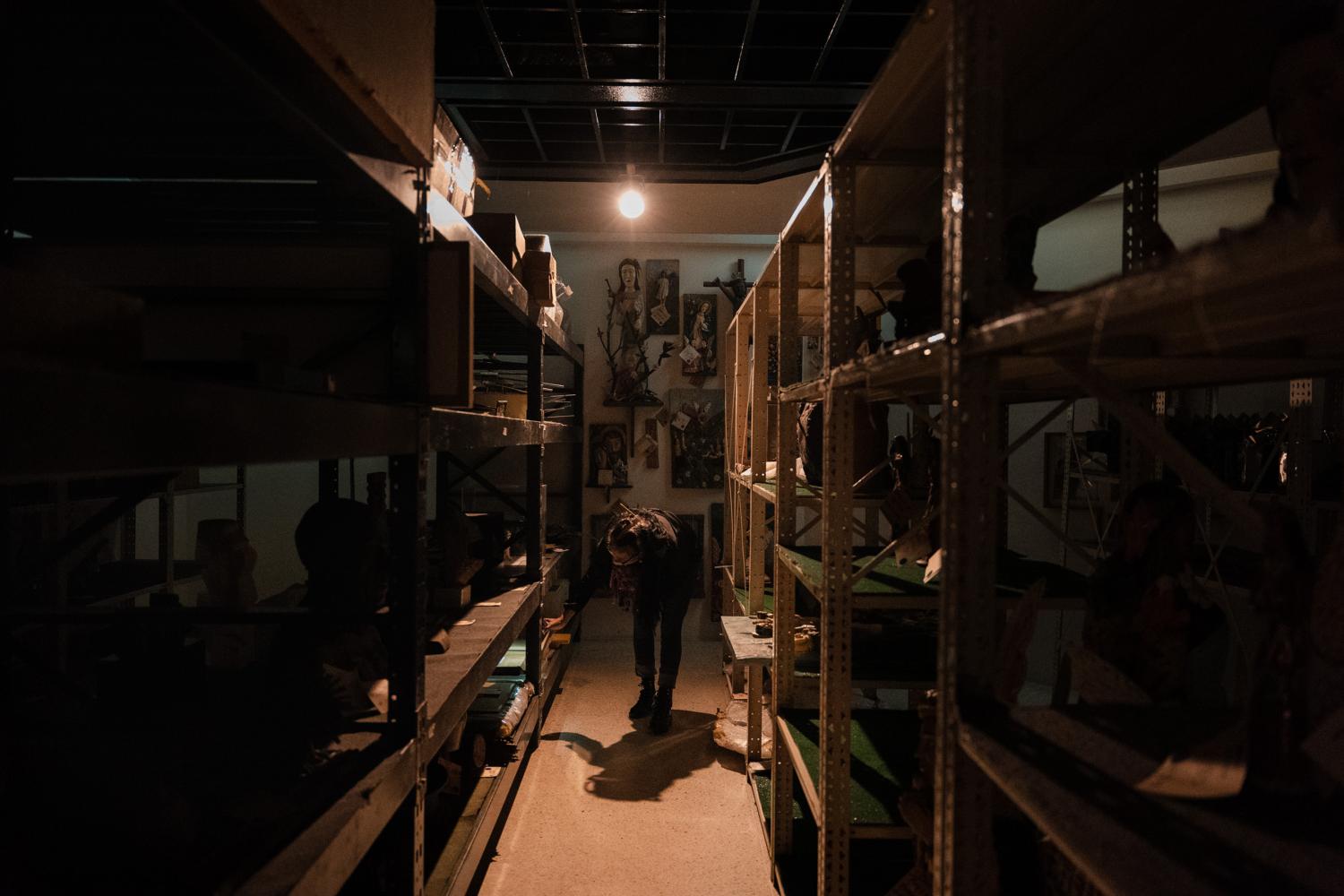 below A worker inspects works of art on display in the vaults of the museum. ADRIANA LOUREIRO FERNANDEZ/nyt

The renovated space presents 86 masterpieces selected from the 4,500 works collected in the museum. A visit from The New York Times at the main storage vault in February found the museum’s most important works in apparent good condition.

Some officials believe the partial reopening of the MACC will herald a broader recovery in the arts scene as President Nicolas Maduro’s authoritarian government abandons hardline socialist economic and social policies in favor of a more moderate approach designed to attract private investment. 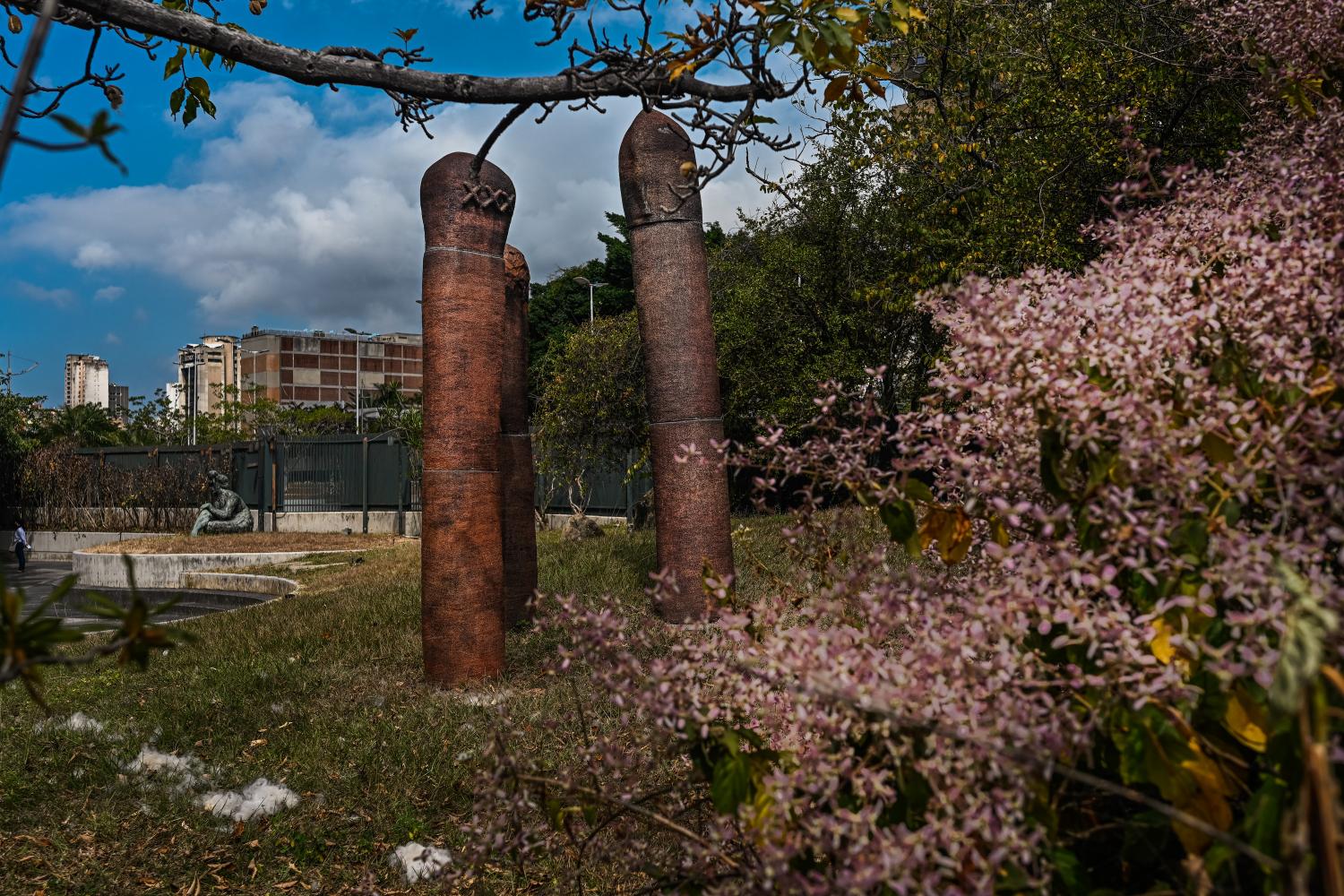 Sculptures adorn the gardens that lead to the museum. ADRIANA LOUREIRO FERNANDEZ/nyt

“The collection of our museums is the heritage of all the Venezuelan people, and that is why it is so important that the spaces are in optimal conditions for its preservation,” said Clemente Martinez, president of the National Museums Foundation, which oversees public museums in Venezuela.

However, several prominent Venezuelan art experts have said the partial renovation of the museum masks deeper issues that continue to threaten its collection. They warn that the museum will not recover without major new investments and a profound change in the way the Venezuelan state views culture.

Most of the museum remains closed. Experienced technical staff have mostly left, victims of the political purges of former socialist leader Hugo Chavez or having escaped economic downfall under his successor, Mr Maduro. 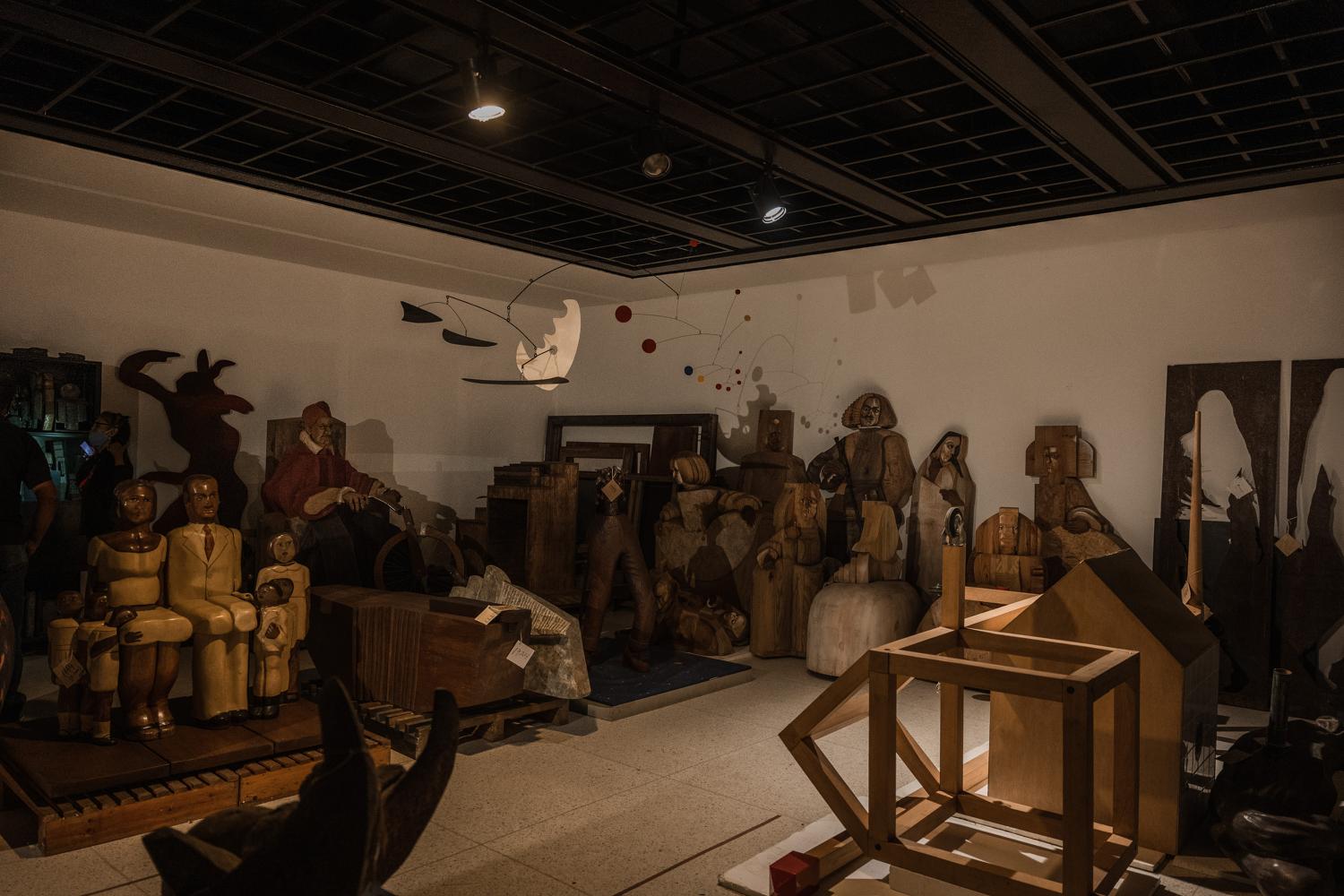 A sculpture by Alexander Calder hangs in the vaults of the museum. ADRIANA LOUREIRO FERNANDEZ/nyt

Years of hyperinflation have drained the institution’s budgets, forcing most staff to emigrate or head to the private sector, which pays in US dollars. Last year, senior MACC officials earned the equivalent of US$12 (403 baht) a month, and the museum was given a daily budget of US$1.50 to maintain its 100,000 square feet (9,290 meters square) of facilities, according to a former employee.

The Ministry of Culture and MACC director Robert Cardenas both declined to comment.

“People can’t work forever just for the love of art,” said Maria Rengifo, former director of the Museum of Fine Arts of Venezuela, MACC’s sister institution. “It’s hard to see all those who have dedicated their lives to museums leaving.”

Economic hardship has pushed some employees into theft. 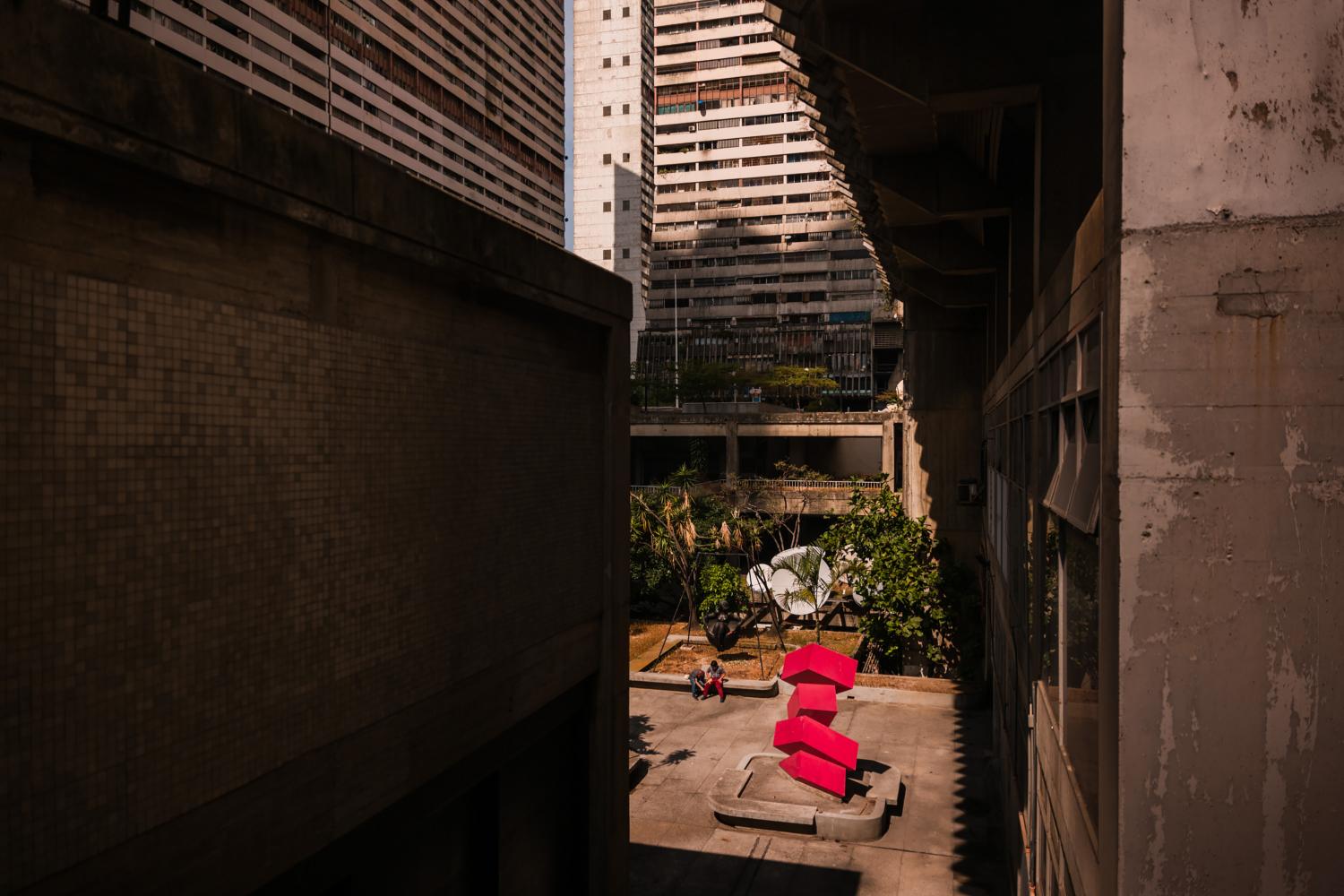 A sculpture in one of the plazas in Central Park, the public housing project that includes the museum. ADRIANA LOUREIRO FERNANDEZ/nyt

In November 2020, Venezuelan police officials arrested the head of security and a curator at MACC for participating in the theft of two works by renowned Venezuelan artists Gertrud Goldschmidt and Carlos Cruz-Diez from the vaults.

The museum’s main works were worth $61 million in 1991, the last time it conducted an appraisal. Today, art dealers said parts of his collection, such as Picasso’s 190 paintings and etchings and Miro’s 29 paintings, are worth around 30 times as much, bringing the combined value to hundreds of millions. dollars and makes them a target for crime. 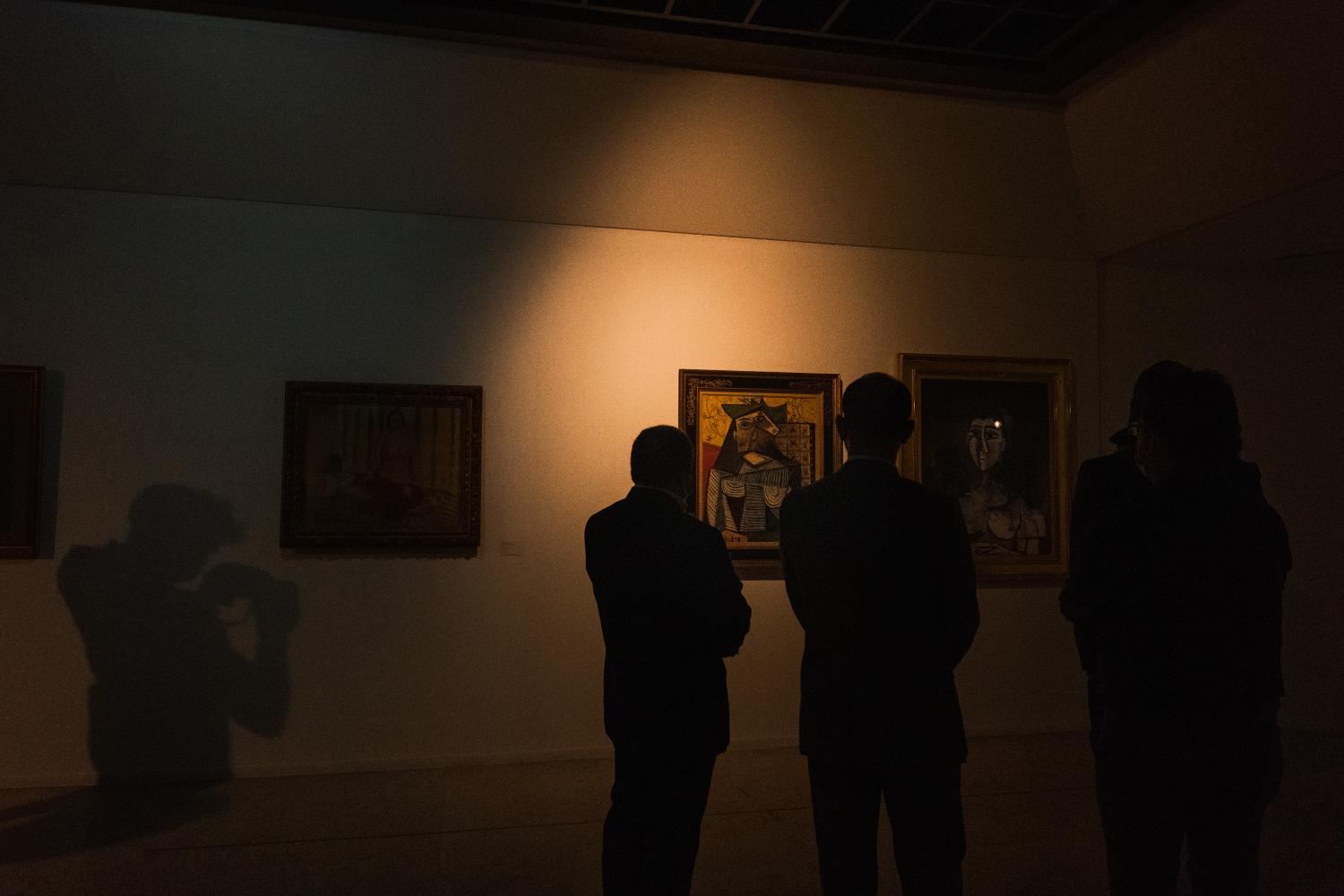 The economic crisis has also devastated the museum building, which is part of a social housing project called Central Park. Built during Venezuela’s oil boom in the early 1970s, Central Park adopted the slogan “a new way of life” to symbolize the country’s rapid modernization.

The 25-acre (10-hectare) complex included schools, swimming pools, restaurants, office buildings, a subway station, a church and a theater, as well as hundreds of luxury apartments in the tallest buildings from Latin America until 2003. apartments were offered to working-class residents under heavily subsidized mortgages.

Today, the hallways and passageways of Central Park are strewn with trash, leaking water, used condoms and the remains of dead animals. The once lush gardens are barren grounds punctuated by puddles riddled with mosquitoes. The underground car park was abandoned when the water tables rose.

The decline of Central Park affected the MACC, which relied on the complex’s central air conditioning and maintenance budget to protect its collection from dampness.

Yet art experts say the biggest blow to the museum came not from the economic downturn, but from Socialist Party politics.

After winning the presidency in 1998, Chavez, a former paratrooper born into a poor provincial family, sought a radical break with the discredited mainstream parties, which had alternated power since the 1950s. 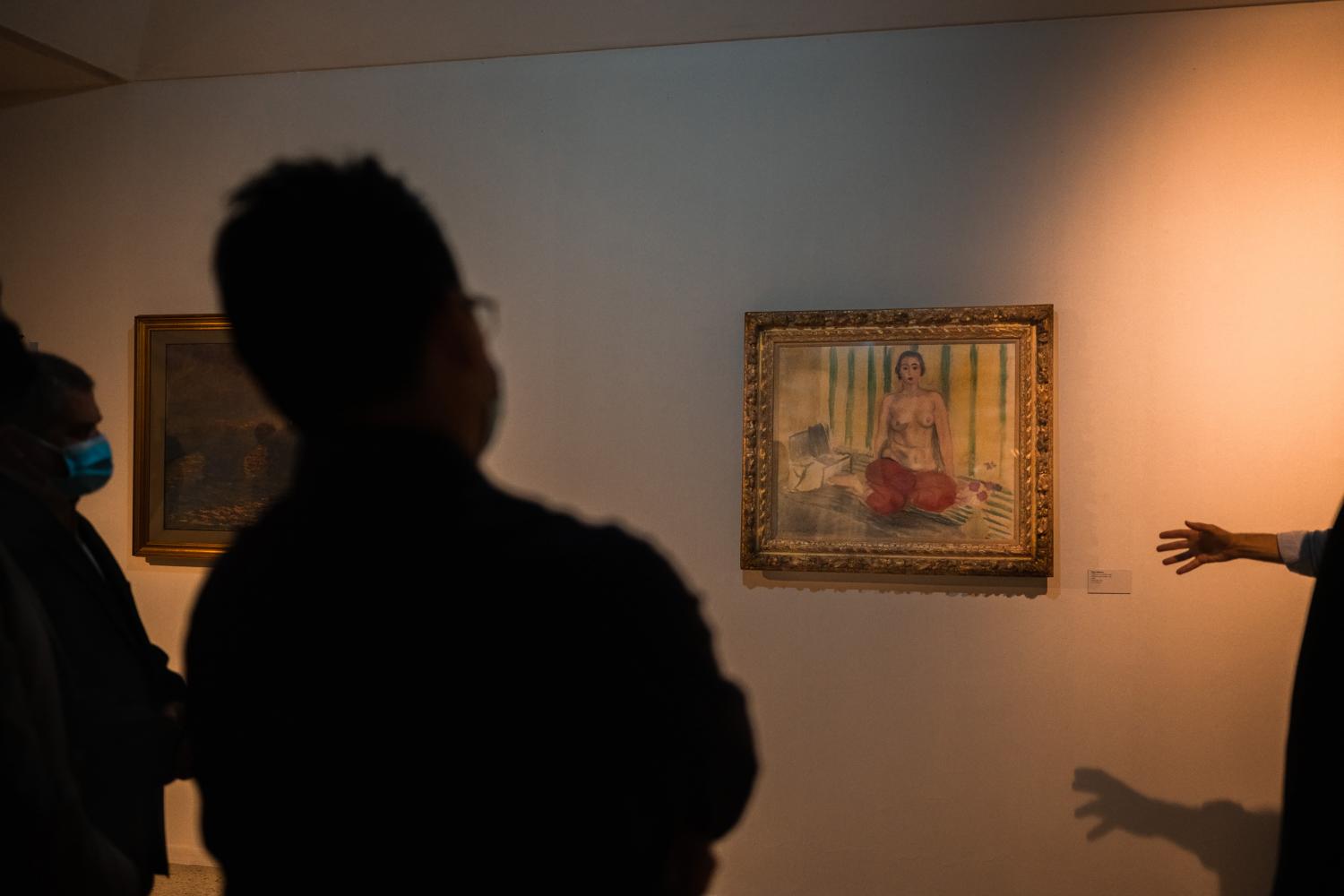 A painting by Henri Matisse on display. ADRIANA LOUREIRO FERNANDEZ/nyt

Reflecting the slogans of his mentor, Fidel Castro, the Cuban leader, Chavez proclaimed a “cultural revolution”, seeking to elevate Venezuela’s traditional styles of music, dance and painting at the expense of what he called culture. elitist of his predecessors.

One of his first targets was the MACC, which was founded and managed since its inception by the famous Venezuelan patron Sofia Imber. For Chavez, Imber represented everything that was wrong with the country: a member of a closed elite circle that had monopolized Venezuela’s oil wealth.

Two years after taking office, Chavez fired Imber from MACC to live television. It was the first time in 42 years that a Venezuelan president had intervened in cultural centers, presaging a broader dismantling of democratic institutions by Chavez.

To survive the sanctions, Mr. Maduro has quietly begun in the past two years to woo private investors and return some expropriated businesses to their former owners. 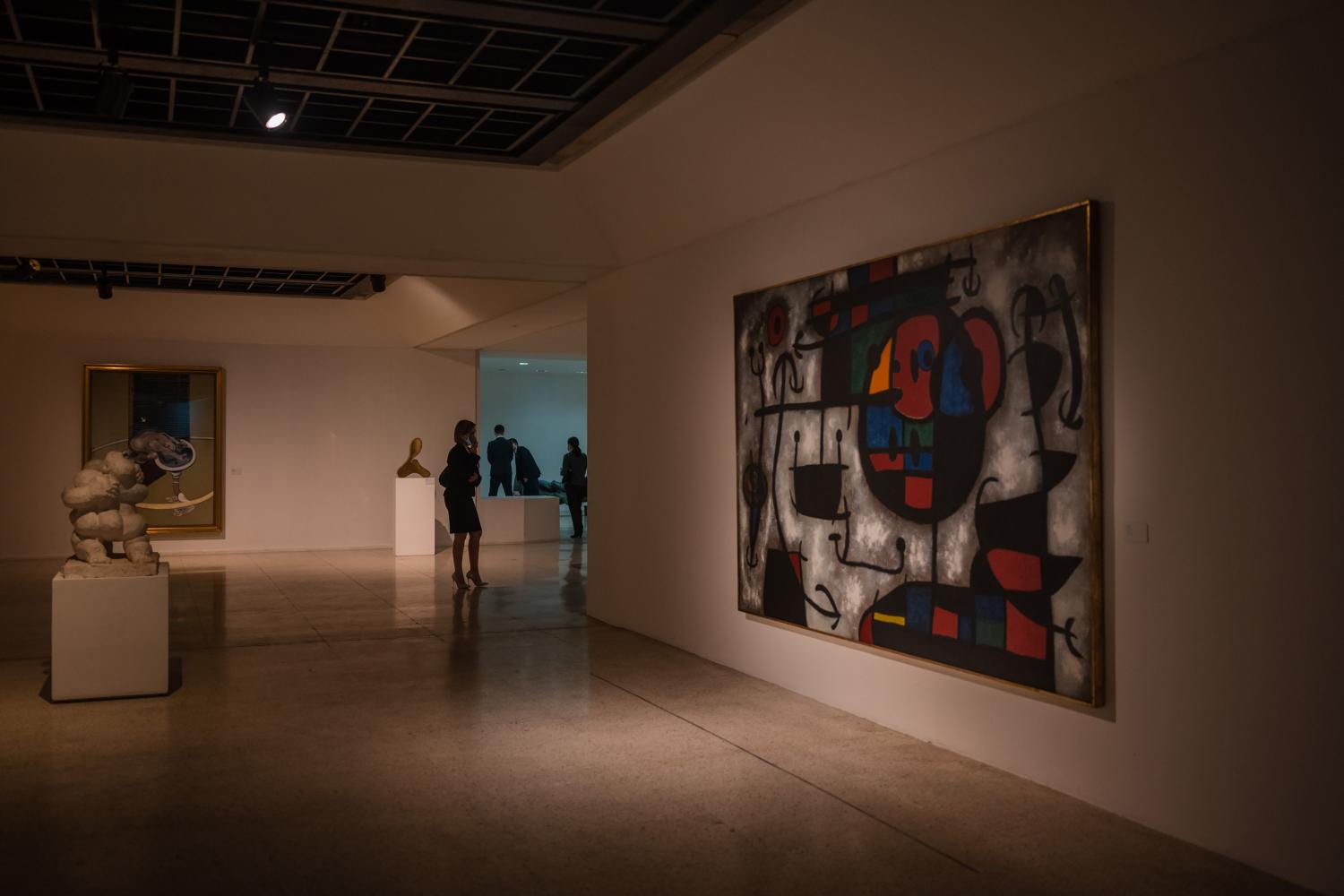 A painting by Joan Miro on display. ADRIANA LOUREIRO FERNANDEZ/nyt

Forced moderation is spreading in the art world. Adriana Meneses, Imber’s daughter, said the government recently approached her about raising financial support for cultural projects from Venezuela’s traditionally anti-government diaspora, a development that was unthinkable a few years ago. a few years old.

When a game is not a game: ‘Rock Paper Scissors’ | Art

In recent days, the New York Times and other news organizations widely reported on the role of former President Donald Trump’s outside advisers in a plan to seize voting machines. Also in recent days, U.S. Democratic lawmakers and the Congressional Black Caucus have accused states led by Republican governors of attempts to restrict ballot access […]

Meet the Cebuana who makes art for Disney, Hamilton and Warner Brothers

“Haven’t you dreamed of adventure? It was a quote from Disney’s “Jungle Cruise”; a quote that led a 23-year-old freelance illustrator from Cebuana to embark on creating art for Disney, the American musical “Hamilton” and Warner Brothers’ limited-edition Echosmith shirt. Amber Liu, a Filipina-Chinese illustrator and marketing and digital designer in New York, has been […]