“The Other Sun” by Jacob Hashimoto, a large-scale piece made of paper, bamboo, acrylic, cotton yarn and wood, was inspired in part by the popular video game Minecraft, which Hashimoto played with his father in his early days. Photo by Robert Jordan/UM Museum

OXFORD, Mississippi — When visitors step into the abstract worlds of artist Jacob Hashimoto at the University of Mississippi Museum and Historic Homes, he hopes they can see faint reflections of the world they know and use them as gateway to new ideas and perspectives.

In “The Other Sun”, the artist’s exhibition at the museum, thousands of small, simple kites hang from the ceiling. Together, however, these jungles of scraps of paper merge into vast abstract landscapes.

The UM Museum is hosting a Digital Artists Reception and Talk from 1:30-3:30 p.m. on Tuesday, April 19 in the Museum’s Speakers’ Gallery. Refreshments will be available alongside a guided tour of the gallery, with Hashimoto delivering his keynote via Zoom at 2 p.m.

The event is free, but registration at https://museum.olemiss.edu/the-other-sun/ is required to join the virtual session.

“The University of Mississippi Museum is exceptionally honored and thrilled in equal measure to exhibit the breathtaking art of Jacob Hashimoto in the galleries of our museum and also in the exhibition space of William’s Rowan Oak. Faulkner,” said Robert Saarnio, director of the museum.

“Mr. Hashimoto is a widely acclaimed visual artist with a history of international exhibition that has earned him wide critical recognition, and our galleries have come alive with his works. 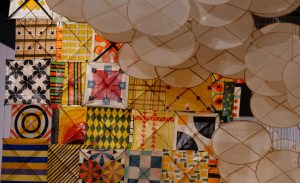 The small kite-shaped pieces that Jacob Hashimoto uses to construct his works allow him to experiment with layers and textures. Photo by Mary Stanton Knight/University Development

Hashimoto first developed his aesthetic style 25 years ago at the end of a creative block while studying at the School of the Art Institute of Chicago. Originally an abstract landscape painter, he felt the pressure to create something that would stand out in the art world.

“There was a feeling that to participate in critical dialogue in this country, you had to bite a piece of it and see what you could get out of it,” he said.

In the midst of his troubles, his father advises him to keep busy and to continue creating in his workshop, even if it is only about kites or model airplanes. As he began making kites by hand in his workshop, the pieces began to fit together both figuratively and literally, evolving into his signature style.

When transitioning from landscape painting to installations, Hashimoto transferred certain techniques, he explained from his studio in Ossining, New York. The kites, acting almost like two-dimensional objects transposed into three-dimensional space, allow him to stack each image in layers as if the piece were a painting.

From there, viewers are encouraged to explore the space created by Hashimoto, the dissonance caused by the dimensions of the kites prompting them to think about perspective and how they view these worlds.

“I was looking for ways to explore the language of painting through a different vocabulary,” he explained. “The facility really provided me with that.”

Growing up, Hashimoto didn’t always plan on becoming a full-time artist. Toward the end of his time in Chicago, however, he found that the art world was looking for people who could help him produce new work that would contribute to discussion within the medium. 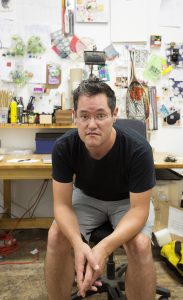 Jacob Hashimoto in his studio. Photo by Anna Weirzbicka

“When I was emerging in the mid-90s, the art world was still reeling from the art crash of the 90s,” Hashimoto said. “There were just no opportunities to live off of it. By the time I left school, things were looking up a bit, thankfully.

Alongside painters such as Brice Marden and authors such as Robert Coover, Hashimoto has also drawn much inspiration from video games and virtual worlds. The title of the eponymous piece refers to the 2011 sandbox game Minecraft, which Hashimoto played with his father in his early days.

“I was playing this game since you had to download it from some weird Swedish website,” Hashimoto said. “The video game references are part of my relationship with my father.”

When Mojang Studios began producing its “Meet a Minecrafter” video series in 2020, it came full circle for Hashimoto. Each episode focused on a professional who either found inspiration in the game or used it in their chosen field, and Hashimoto was selected as one of the subjects.

It’s easy to see the impact the game has left on his art; the simple cubes of Minecraft joining together to create gigantic landscapes in the same way as the kites of the abstract worlds of Hashimoto. The two stand as complementary, yet contrasting, approaches to creating a world that gives viewers freedom of movement and perspective while letting them connect with something much bigger than themselves.

Even with his intense fascination with virtual worlds, Hashimoto still has a soft spot for the specific kinds of experiences that real-life art installations can bring.

“I think art can make you feel seen,” Hashimoto said. “The way you experience art is fundamental to its existence. Other technologies tend to be alienating and important in ways that minimize your experience with the world. …

“You have no paternity on it. When you’re in your body and walking through a physical space, I think it gives you a sense of authorship that a digital environment might not give you. 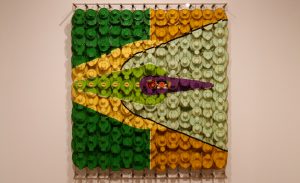 Not all of Jacob Hashimoto’s works are giant installation pieces. Smaller works, like this one on display at the UM Museum, allow her to experiment with colors, textures and layers in great detail. Photo by Mary Stanton Knight/University Development

Hashimoto’s art has been featured in venues around the world, but his studio has always strived to engage with small communities far from shore. Hashimoto shared his experience growing up in small town Washington and how exciting visiting art events could be.

“It’s important to be able to have that kind of ongoing dialogue with your house,” Hashimoto said. “I remember when bands came to town. If we had access to culture in our small town, that was really important to people.

“When you grow up in Manhattan, you can go see any band or show or movie you want. You can do anything, so none of that makes sense. For us, a handful of things to which we were exposed were extremely significant.

“I think of the kid growing up in Oxford who has never seen anything like this, and I think we can be that for them.”

“The Other Sun” will remain on display at the museum and in Rowan Oak until September 3. The UM Museum, located at Fifth Street and University Avenue, is open 10 a.m. to 4 p.m. Tuesday through Saturday. Free entry.

In April, multimedia artist Ya La’Ford will begin an artist residency at Ogden Contemporary Art, and Utahns couldn’t be more excited. Ya La’Ford: the artist With her impressive and multifaceted background, including a law degree as well as an MFA, La’Ford’s art comes in many shapes and sizes. Whether you’ve seen it growing on murals, […]

Sarah Power knows Canadian designers. As the founder of Inland, Power has created a market filled with exceptional local clothing and accessories. Lesley Hampton, Hilary MacMillan and Cat Janiga are just a few of the dozens of top designers available on the site. But Power is more than a retailer, it’s a tireless champion of […]

The Design Dispatch offers essential, expert-written news from the design world, curated by our dedicated team. Think of it as your cheat sheet for the day in the design delivered to your inbox before you’ve had your coffee. Subscribe now. Got something our readers need to see? Submit it here. Art Nouveau-rich Latvian capital welcomes […]